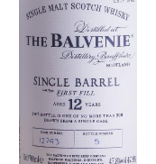 The Balvenie Single Barrel First Fill is a 12 year old single malt whisky, aged in a first fill, ex-bourbon cask. Almost all Scotch whisky is matured in casks previously used by Bourbon distillers. When brought to Scotland and used for the very first time they are known as ‘First Fill’.

Our Malt Master samples the aged whisky, cask by cask and selects only those characterised by sweetness and subtle vanilla oak to be bottled as The Balvenie Single Barrel First Fill.

A series of “limited editions” – Each bottle is one of no more than 300 drawn from a single cask and each carries the number of the cask in which it matured.

Add your review
0 stars based on 0 reviews